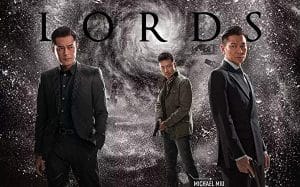 A wealthy businessman tries to eliminate a drug cartel he was working with, while a police officer tries to find justice without breaking the law.

The story begins in 2009 in Hong Kong, where a criminal gang in Ching Hing controls much of the city. This criminal gang, led by Yu Nam, has a rule: No drugs. Yu Nam has two trusted people under his command: Dizang, a charismatic and intelligent leader; and the other is Yu Shun-Tin, a faithful man who has problems with alcohol. Upon hearing the news that drug dealing is taking place in one of the districts, Yu Nam decides to punish Dizang and exclude him from the gang.

It is now 2019, and Yu Shun-Tin has left the world of crime to get involved in legal business. On the other hand, Dizang has become one of the most important drug lords in Hong Kong and does not intend to stop until he obtains the monopoly of the drug business in Hong Kong. However, $ 100 million is being offered to remove Dizang from the landscape.