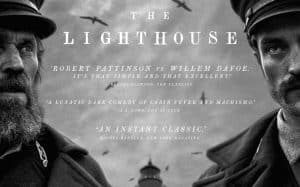 The movie The ligthouse abounds with symbols and themes so widely used. Sexuality unleashed in isolation, demonization of the woman, appetite for violence as the engine of sexual repression, sad inability of two human beings of the same sex to support their otherness in a cloistered environment. Countless influences from the well-known Greek myths (Prometheus, Proteus), from novels written by the likes of the great like Melville or from the strange stories that combine the supernatural with horror.

It seems that the writers, the Eggers brothers, were also inspired by a real tragedy, from 1801, in which two lighthouse keepers, both bearing the name of Thomas, were held captive during a storm.

People without education and culture, captive in a hostile environment, become the slaves of sexual drive, being dominated by a violent greed for gaining power … This is what the writers are trying to convey. But the characters depicted in the film do not need this environment to unfold, they are already that way. The heroes of this film do not undergo any change, they are in a continuous pendulum between the power of imaginary power and the violence of impotence and they have a predictable end.

The symbols of femininity that appear in the film are represented by the mermaid and the bird.
The woman is portrayed as a monster, disguised as innocence and vulnerability, which seduces and disturbs the hero’s mind, and Bird is the sexual desire that ends by consuming it in its entirety.

The lighthouse movie is about pride. The lighthouse, the apple of discord between the two men, is nothing more than a phallic symbol, and maintaining the light is the supreme act of affirming masculinity. But the Hybris destroys.

But these fascinating themes do not save this film from the superficial and pretentious directorial vision. This director does not delve into the themes gathered meticulously, in this scenario, in this collection of myths, his only purpose being to magi the pride of the filmmaker delighted in their discovery and to shock through scenes imbibed in a free, ridiculous and uninteresting sexuality, to the viewer. casting almost in his eyes, the directorial dejections.

A bit of Hitchcock. A little Shutter Island. And a lot of imagination from director Robert Eggers, who manages an original yet unique creation (I can’t remember seeing anything like this in the last decade, even more), but paying (I think) a tribute to his predecessors.
Shot in black and white, the American filmmaker’s film has a stunning visual impact on the viewer. The background is morbid, suffocating, the decorations are gray, foreshadowing the bad.
How to do it to lose your mind? The recipe is simple: two lighthouse keepers, one older, the other a teacher, isolated in a desert place, facing both their own demons and what might be called the spirits of the surroundings.
A film that abounds in weirdness, ambiguity, visions that demand decryption, The Lighthouse is, at the same time, the rematch of an actor who has been seen (and somewhat accused of playing in) more superficial films. I mean Pattinson. Honestly, I wasn’t a Robert Pattinson fan or even Willem Dafoe (who I had only seen in a few minor roles) until watching “The Lighthouse.” But faced with the profound, disturbing interpretation I give to characters who oscillate between lucidity and madness, noting how transposed they are in roles, I exclaimed: “YES! A hundred times yes, these are two authentic actors! ”.
“Depression is worse than the devil,” the old guard says at one point, and his words seem to have their mark on the further action.
I said that the movie reminded me of Hitchcock, in general the gloomy atmosphere and in particular the seagulls. But I dare say, and I assume this statement, that “Lighthouse” is a better and deeper film even than “Birds”. The characters of Eggers (who also constitute a revelation to me) have unexpected depths, fall into abysses and rise to the top, have psychological subtleties that you cannot find in other achievements.
And it is also a proof of great talent to build such a story with only two characters and a desert island. The heroes of the American filmmaker are timeless, appearing either from Hemingway’s or Jack London’s works, or from an ancient tragedy, clamoring for their beliefs, despair, loneliness and madness in front of an imaginary audience. (Publicly formed, if you will, by contemporary film-makers).
When Ephraim Winslow kills the seagull, he unleashes a whole string of misfortunes, because, without realizing it, he opens the Pandora’s Box. Man cannot stand in the way of the unleashed nature, nor of the spirits that float between two worlds.
The monologue of Thomas Wake (Willem Dafoe) when he curses his young companion is impressive and is of an extraordinary acting skill (from the recent history of the watched movies, only Sir Anthony Hopkins in “The Rite” has achieved a similar performance ).
Also noteworthy is the haunting sound, repeated as it is to infinity, of the siren that is heard for almost the entire duration of the film.
Things are getting worse and worse in this mystery movie with thriller and horror accents, and the ending, while it may not seem to offer all the answers, is logical in the sense that Ephraim Winslow couldn’t get the release, and then ends up devoured by the birds.
She couldn’t get it because, no matter what the exit from that labyrinth of terror and madness, she couldn’t find it through the path she chose.