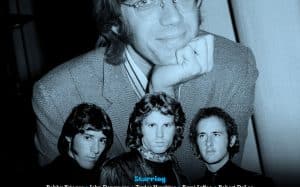 The Doors: Break On Thru – A Celebration Of Ray Manzarek

Trafalgar Releasing and The Doors Music presents “The Doors: Break on Thru – A Celebration of Ray Manzarek”, an event celebrating Ray Manzarek, the legendary co-founder and pianist of The Doors. This concert-tribute and documentary was filmed in Hollywood at the Fonda Theater and brought Robbie Krieger and John Densmore on the occasion of Manzarek’s birthday to celebrate his legacy and influence The Doors over a whole generation.

The special concert includes footage and interviews that have never been featured before and several classic moments from The Doors repertoire, featuring Kryger, Densmore, Taylor Hawkins from Foo Fighters, Robert DeLeo from STP, Brian Ray from the band to Paul McCartney, Exene Cervenka, John Doe, Warren Haynes, Rami Jaffee and many others.

With over 100 million records sold worldwide, ranked 100th among the most important bands of all time, The Doors are true legends of the music industry.