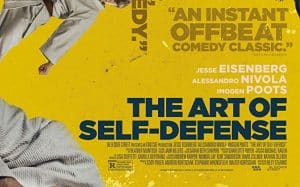 The Art of Self-Defense

The Art of Self-Defense – follows the story of Casey (Jesse Eisenberg), a shy accountant who doesn’t seem to fit his work environment. One night, while buying dog food, he was accidentally attacked on the street and beaten by a gang of motorcyclists. Afraid of not venturing out at night, Casey tries to buy a weapon, but is informed that there is a waiting period.

Thus Casey decides to attend a martial arts course to learn how to protect himself, but in this process his paranoia escalates. Over time, he becomes stronger and more confident, though he is still unable to face his fears.

Under the watchful eyes of a charismatic and mysterious Sensei (Alessandro Nivola), and a powerful woman with a belt, Anna (Imogen Poots), Casey gains a new sense of confidence for the first time in her life. However, when he attends the instructor’s mysterious night hours, he discovers a sinister world of brotherhood, brutality and hypermasculinity, and embarks on a journey that places him directly in the spotlight of his enigmatic new mentor.