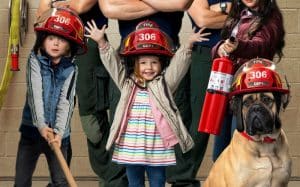 An elite team of firefighters have to take care of three brave children they have rescued from a fire, but they don’t have to expect the worst mission of their lives.

Jake Carson is used to being exposed to high risks when parachuting into forest fires. His only concern is work. His subordinates, who live with him in the section, respect him and admire him. After adolescent Brynn and her younger siblings, Will and Zoey, are rescued from a fire, taken out of the cottage in flames, they are temporarily held in the fire station. The three children will become Carson’s hardest mission.