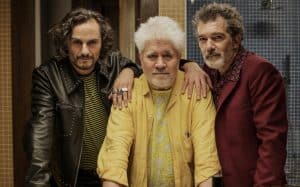 Pain and Glory is an autoreflexive drama by Pedro Almodovar with Antonio Banderas as a fictional Almodovar, and was received at Cannes as the director’s best achievement in recent years. Although he has been considered one of the most prominent European directors for years, the 69-year-old Spaniard has never won the Cannes prize, although he has been in competition for five times so far.

The Guardian has written that the director offers us another sensible and very personal gem: the director’s character, played by Antonio Banderas, is facing the prospect of death. Pedro Almodovar has found a personal record more intense than ever for his new film about an elderly director retired from his job, face to face with illness, depression and loss of power. Pain and Glory is a film about the fall of life in a minor meditative key. He brings Almodovar’s attention to the issue of death: his own, that of his loved ones, but also the passion of filmmaking that could either conquer death or lead to his acceptance.